There are two factors: the animal itself and the hunter. There’s nothing you, the hunter, can do about the animal – what it ate all summer, how hard life had been before you met in the woods some frozen evening. Even who its parents were determine the quality of the meat. But you can control what happens after the shot, and aging can do a lot to improve the hand nature dealt you.

The First 48 Hours After Your Harvest:

This is when rigor mortis is going in, and then out again. When it’s in, the carcass that was once loosey-goosey is now as stiff as a board. If you let the carcass freeze now, your steaks and roasts will be tough – even if you started out with a tender, little forkhorn. And it doesn’t matter if it froze on the meat pole, by accident, or in your freezer. It’s what meat scientists call “thaw rigor.” It’s permanent, so no amount of moist cooking will cure it. So be patient. Let the rigor run its course. The animal will get stiff, then less stiff. Then you can freeze it.

Rigor should be out now, and it’s time to make a decision. Cut a piece of shoulder steak off and cook it. If it’s not as tender as you’d like (and it didn’t suffer ‘thaw rigor’) now is the time to tenderize by aging.

Tenderize By Aging: But How Long?

Temperature effects aging. At 80 degrees, it gallops. At 20 degrees, it crawls. In a perfect world, you’d age the meat at 33 to 36 degrees, until it’s as tender as it can get. We aged a tough, old elk tenderloin in the fridge one year to test time and temperature (a constant 36). Two to 3 days did almost nothing; 7-10 days saw a tremendous difference. After that, there was improvement, but it was minimal. It was time to put him in the freezer.

After Aging, How Can You Tell If Your Animal Is Tender Enough?

Cut a steak from the shoulder, quick-fry it, or put it on the grill – but only to medium-rare, at most. (Dry-cooking steaks beyond medium-rare toughens them, too.)

If they are tender enough, wrap each skinned quarter in a layer of freezer paper, then let them sit in the freezer 6 to 8 hours. By then they’ll be firmed up and ready to cut.

Cutting while the carcass is pretty frozen is the easiest way to do that. Plus, frozen meat is much easier to control, so you can cut uniform pieces. Later you’ll find it’s easier to cook steaks to the exact temperature if they’re all the same thickness. 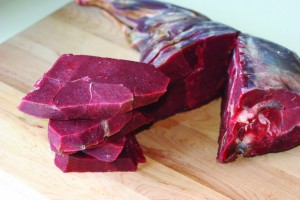 TIPS FROM THE CHEF ON CUTTING STEAKS

There are only two tricks to cutting good-looking steaks: one is to partially freeze the quarter so the meat doesn’t slide around under your knife, and the second is to cut across the grain.

(Oh, and it pays to have the right knife. A 6-inch boning knife is great for deer, but to cut bigger elk or moose steaks, a longer knife saves time, and cuts more neatly.)

TIPS FROM THE CHEF ON CUTTING ACROSS THE GRAIN

This article originally appeared at outdoornews.com.