Gavel and book on a table 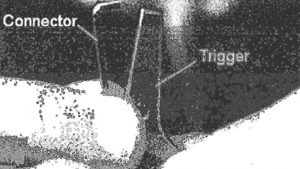 A picture of a picture showing the gap between the trigger and connector of the Walker Trigger Control, what many plaintiffs have alleged is the root cause of the defect. (Photo: Pacer)

A mere three months after a federal court approved a settlement agreement between Remington Arms and a Missouri class over the Walker Fire Control, the gun maker has been hit with more lawsuits regarding the infamous trigger design.

While the trigger has been the subject of more than a hundred personal injury lawsuits, the newest cases were filed after the gun maker held a claims period in which those who owned one of the allegedly defective rifles could either file a claim or reserve the right to take the matter to court, if they wanted.

A search of the federal court’s system database shows three new cases that allege a Remington firearm, equipped with the Walker trigger design, discharged without the pull of a trigger and caused serious injury.

A Georgia man filed the most recent complaint. Cody Shearouse, of Effingham County, filed the case in a Savannah federal court last month, saying his Remington 770 discharged last July when he closed the bolt on a round. With the rifle pointed down, the projectile struck his foot. The lawsuit said the firearm’s trigger had not been modified and he did not pull the trigger.

The second case involved a Montana man whose rifle discharged when he released the gun’s manual safety. Ed Chopp, a rancher from Custer County, filed suit in a Billings federal court in May, saying he had his rifle with him in his truck just in case he saw a porcupine that had been a nuisance in the area. When he saw one of the critters in March 2016, he grabbed his rifle and lifted the safety, but the rifle discharged. The projectile struck his foot.

The third case, filed in March in an Idaho federal court by a Twin Falls man on behalf of his underage son, alleged a Remington 870 shotgun youth model discharged when it hit the ground. According to the redacted complaint, the man was carrying the shotgun, with the safety engaged, when he slipped on some ice, accidentally lost control of the firearm, which hit the deck butt-first, discharged and struck his 11-year-old son in the leg. At the time of the December 2014 incident, the man took hold of the shotgun because his son’s fingers got cold as they were tracking a bobcat.

In March, a federal court approved a settlement agreement for a major class action case against Remington that ultimately cost the gun maker $12.5 million — mostly attorneys fees. Originally, the class sought to force Remington to recall the more than 7 million rifles equipped with the Walker trigger, but after almost three years of negotiating, the effort netted only marginal participation. Some 0.29 percent of owners filed claims.

This article was originally published at Guns.com.